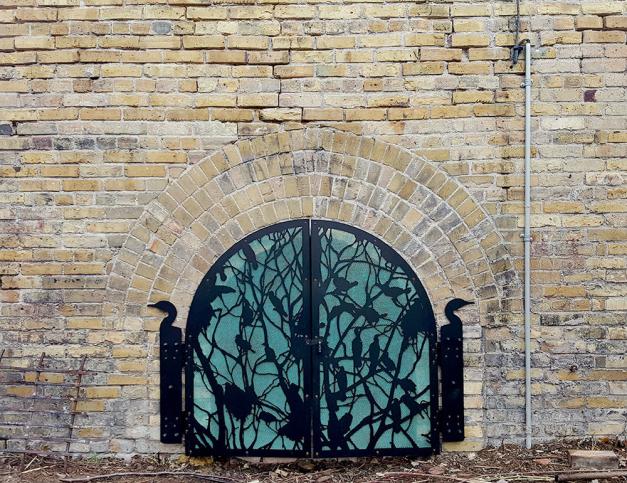 Urban development, green-space and animal colony habitation combine to create Colony, a new light and sound installation nestled at the base of the Historic Chimney at Evergreen Brick Works. Constructed with an architectural expanded metal netting, steel and oxidized copper, Colony is one of seven works featured in The Living City Art Exhibition.

Sponsored by the Toronto Region and Conservation Authority (TRCA), Evergreen Brick Works and artist collective Crazy Dames, this exhibit showcases the progression of environmental sustainability in Toronto. Colony addresses the theme of land use.

At the helm of this project is Cole Swanson, contemporary artist and educator based in Toronto. “When I heard about The Living City Project, I thought it was the perfect opportunity to start to work with different members of the community and to find out a little bit more about some of the really concrete or critical issues that are being faced in the environment.”

Cole was drawn to two green spaces in Toronto for his research: Tommy Thompson Park and The Leslie Street Spit. Here, he studied the cormorant colony during their summer roosting cycle.  The cormorant colony are a species of large black shorebirds that coexist just parallel to the urban sprawl in Toronto, a land use relationship explored through Colony.

Understanding the complexity of the animals to their habitat involved both visual and auditory research. Cole recounts this process: “I set up camp with a recording engineer and we started to work with the birds, listening to the different vocalizations and trying to process the immenseness of that habitation.” The result is a melodious recording of forty to fifty thousand cormorants in a sonorous tube temporarily housed within Colony.

Photos taken of the birds were digitally transformed and used to cut the steel frame. Cole designed spaces for the hardware, with specialty bolts, brackets and locking mechanisms to match the aesthetic.

Upon realizing how worn the gates on the Historic Chimney were, it was decided that Colony would become a permanent replacement underneath the brick arch. “The two-part gate was constructed with laser cut steel and copper ampliato bound together. The piece was mounted into the mortar of the historic structure,” Cole comments.

Ferrier Design supplied the architectural expanded metal for this project: more specifically, the copper ampliato you see behind the cormorant silhouettes.

When asked how this colour was achieved, Cole remarks on the ability to produce different colours through chemical processes: “The specific blue-green colour was achieved through a series of experiments exposing copper metals to ammonia and sulphur solutions. Copper will react to many chemicals, and the oxidation process will create various hues ranging from red, brown, blue, and green, depending on the specific method used.”  The colour represents the deep blue eyes of a cormorant.

Each component of Colony is a strategic choice in design that stays true to its subject. “My design concept was to use the same colours as the birds themselves: the black of the steel representing their bodies or feathers, the blue-green of the copper representing their eyes or inner beaks, and the yellow brick of the chimney representing their bright yellow bills. The architectural expanded metal provided a safe netting so that visitors and children do not get their fingers stuck between the steel frame branches.”

Visit Colony and six other sustainability-inspired artworks at The Living City Art Exhibition at Evergreen Brick Works. The Exhibit runs until December 31st, although you can find Colony as a permanent installation.

As an artist, educator and curator, Cole Swanson explores interspecies relationships as they relate to evolutionary systems. His recent work takes on a post-humanist focus on materials in the context of social, cultural and biological histories. His cross-disciplinary methods include the use of sound, painting, installation and sculpture. Solo and dual exhibitions, grants, curatorial works and professional roles within the arts build his diverse portfolio.

Read more about Cole Swanson and view images of Colony on his website. Please contact Cole directly with any inquires related to the artwork.