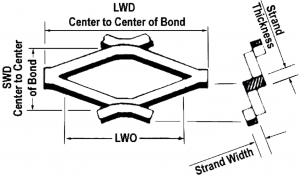 At Ferrier Wire we have renamed all of our expanded metal products "Ampliato" followed by numerical designations to make it easier to identify and distinguish expanded metal from the other mesh and perforated products we carry.

How it is Made:

Expanded (Ampliato) metal is made by taking sheet material (either coil or sheets) and running them through a machine which shears or slits the metal and in the same process, continues to pull the sheared material away from the rest of the sheet (hence the term "expanded metal").

This video demonstrates this process using a typical press machine.

As you can see, the piece that comes out of the machine produces expanded bands of metal that are turned up from the plane of the original material.  This is called "Raised" expanded metal.  This material can then be put through flattening rollers creating "Flattened" expanded metal.

Expanded (Ampliato) metal is most commonly available in steel, with some aluminum, stainless steel and galvanized options.  Ferrier Wire also carries a very fine Ampliato .250 x .400 made from C110 copper.  Custom metals and patterns are available but tend to be expensive due to raw material minimums and set up costs.

How it is Specified:

Expanded (Ampliato) metal is a bit of a confusing material to specify and describe due to the manufacturing process, the nature of the material and the number of variables involved.  Industrially it is designated by a number (typically a fraction) followed by another number (#) e.g. 3/4 #9.

If there is an "F" after the designation, it refers to "Flattened" expanded metal (in this example, 3/4 #9F).  Sometimes an "R" may be used to indicate "Raised" material but this is not necessary.

If a letter is not noted, it is "Raised" material.  In this case, the 3/4 loosely refers to the centre to centre of bond short way dimension and the 9 refers the strand width of the material.  Please refer to the expanded (Ampliato) diagram shown here.

For further information about the specifications, please contact us at Ferrier Wire.

Raised expanded metal - Heavier expanded metal (commonly referred to as "grating") is often used in metal stairs, catwalks and other typically industrial applications where non slip stairs and walkways are required that cannot be a flat surface (for drainage, weight, wind resistance or other reasons).

Other applications for raised expanded (Ampliato) metal is guarding, and any project where an economical divider is required which will allow light and air to flow through it, for example protective screen in the back of a pick-up truck to prevent cargo from coming through the back window in the event of a collision.  The finer expanded (Ampliato) metal is called metal "lath" and is commonly used as a plaster/stucco base.

We are seeing an increase in the use of expanded (Ampliato) metals in non-traditional architectural and design applications.  Recently we have seen it used on a larger scale as an attractive fencing and security alternative at a Hydro location. It has also been used as an effective window shade (a very coarse and broad pattern) in warmer climates.

For our selection of growing non-standard Ampliato patterns, click here.

On a smaller scale, check out a creative example of incorporating the Ampliato product into a juice bar display.

One of the main benefits of expanded (Ampliato) metal is that it is a relatively economical form of metal with holes in it. Little work is needed to create these holes when compared to perforated metal and wire mesh.  The trade-off is a product that is not as precise as the other two materials.

However, in many applications, this precision is not required or an issue.  Expanded (Ampliato) metal is relatively easy (and economical) to work with from a fabricating perspective.  The most important aspect to consider is that expanded metal has sharp edges due to the manufacturing process.  The flattened expanded metal is even sharper than the raised material.  Sandblasting the material and powder coating are a couple of options to minimize this hazard.

For further information about our Ampliato metals, perforated metals or wire mesh products, please contact us.