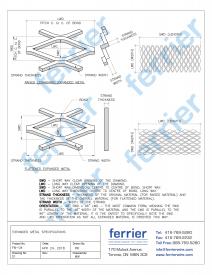 Expanded metal can be a difficult product to fully understand, thanks, in part, to a nomenclature that does not always describe the opening and/or gauge, and to a large variance in the number of specifications and terminologies used. The purpose of this post is to try and clear up some of the confusion and remove some of the mysteries surrounding expanded metal.

How is expanded metal manufactured?

Expanded metal can be a very useful material, but it does have a few drawbacks. Firstly, it can have very sharp edges; there are also limited customization and sizing options for orders. In addition, the raised expanded metal can present fabrication challenges, due to its ridges. Finally, it is a fairly imprecise material due to the manufacturing process; manufacturers state dimensional tolerances of up to +/-10%.

Despite this, expanded metal is a very useful material that sees notable use in design and architectural industries. To learn more, or to begin the process or ordering, feel free to contact us anytime.